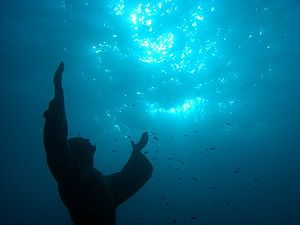 Christ of the Abyss – photo from Wikipedia

I am banned from going to the gym today. Ever heard of it? M says that I am overdoing it. Is there such a thing? I rested on Saturday and Sunday. Well sort of. My body was aching all over in a good ache kind of way so I rested Saturday. But Sunday we went out to sea. My first time out since summer started. I am a little tanned. Ko, if you are reading this, it so freaking hot now, you escaped it by 2 weeks. A week later, and both Sha and you would have fried in the heat. It was about 38˙C with 86% humidity. If I wasn’t out at sea, you would need a crowbar to pry me out of the house. We went out on our jetski and since M was driving, I didn’t want to, being lazy ass and all, I had to hold on to him as we were going like 60 knots. Crazy fast! Which ended with me having sore muscle, tan and a great day! In the end, I actually didn’t rest much. 😛

So, since I am banned from going to the gym or exercise, I am blogging. Yay! My prolific moments shall continue. As expected, I had to break this post to have dinner with the family but now I am back.

I have been living here on the Italian Riviera for years and have heard of this statue of Christ of the Abyss off of San Fruttuoso but I have never seen it in person. You can read more about it here. What’s more, I pass it all the time whenever we are out at sea on our way to Portofino or Sestri Levante. You can only reach San Fruttuoso either by foot from either Camogli or Portofino and from what I have read and heard, it takes about 2-3 hours to get there and the same to get back. Quite a hike. The easiest way would be by boat. There are more information about getting there from here, here and here.

So last Sunday, I decided that it was time I see it for myself. Told M lets go there for a swim since we didn’t want to go all the way to Portofino. On our way into the bay, the place was littered with jellyfish which made me a little nervous swimming there. But as we got closer to the beach it was clearer and free of jellyfish. What a relief! The water was cold at first dip but refreshing.

I set out to look for the statue and heard that it is further out and about 15m down. Water is very clear so I was hoping to be able to photograph it since I had my camera with me. I swam around till I caught sight of the hands of Christ. I tried to dive down closer to it to take a photo. I had on ill fitting goggles that kept letting water in. I possibly managed a paltry 3 metres and kept getting my vision blurred by water entering my mask. In the end, as they say, I anyhow snapped a picture. This is what I managed. You could just about see the outline of the outstretched arms on the left of the picture.

What I managed to take

After a few failed attempts, I swam back to the jetski and urged M to dive down and take a better picture for me. 😛 He being the sweet man that he is obliged me. This is what he managed. He took a much better picture but still blur. 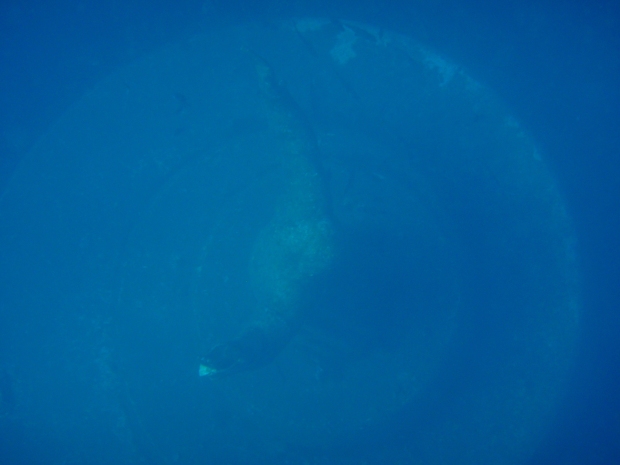 It should actually look like this when taken from a better position with all the right scuba gear.

Well at least I have seen it in person though not as clearly as I would have liked. Maybe I can rent some scuba gear the next time to see it better or buy better fitting goggles and train my lungs better to withstand the dive down to not only see it but to maybe photograph it better.

I have another post about my Sunday (when I get round to it :P)  but this was one of the highlights of that day! 🙂

There are 2 more of these statues in the world. 1 a gift from Genoa to St. George’s, Grenadaand another was presented to the Underwater Society of America in New York and was later placed off Key Largo, Florida. Hopefully some day I can visit them both.

8 thoughts on “Christ of the Abyss in San Fruttuoso”